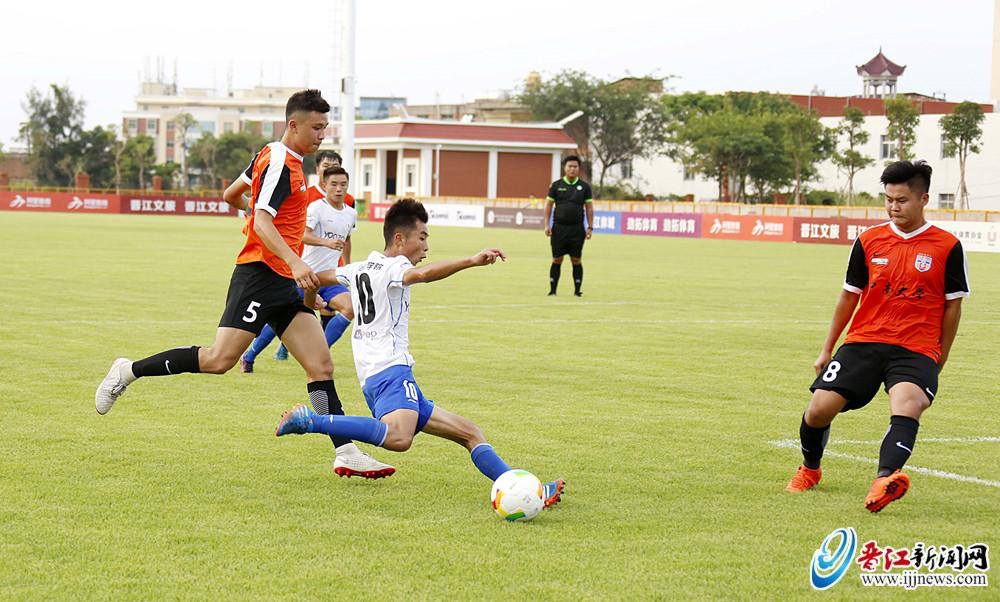 ijjnews.com, Aug. 19 -- The day before yesterday, group matches of China Qualifying Tournament of 2018 AUSF Asian Football Cup officially began in Jinjiang. The matches were held in 6 venues. Yesterday, 5 matches were held. Penalty shoot-out occurred in the one between Central South University (CSU) and Chengdu Sport Institute (CSI). At last, CSU won the match by 7-6.

As the match began, Mu Zuyi, No.21 player and team captain of CSU broke through from the right sideline and passed the ball to Li Zelong, No. 25 player in the midfield. Although there was only a goalkeeper in front of Li Zelong, he was hesitated and resulted in a non-threatening shot, which was easily blocked by the goalkeeper. In the 47th minute, CSU player scored a goal by a set-piece. In the first half, CSU took the lead with 1:0.

In the second half, the two teams changed sides. CSI took advantage of its speed and made the CSU player foul in the penalty area. Xuan Peng, No. 9 player of CSI stood at the penalty spot and scored a goal, achieving 1-1. Then both sides increased the intensity and their physical strength was largely consumed. In the last 10 minutes, He Hua, No. 10 player of CSU entered the court. In the 72nd minute, He Hua attacked through the middle, dribbled one on one after taking the pass, then scored a goal with push shot after the goalkeeper fell to the ground. CSU took the lead again and never gave up the attack. In the 79th minute, He Hua scored a goal again and achieved the score of 3-1.

Facing aggressive CSU, CSI never gave up, but decided to fight to the last moment. In the 88th minute, Xiao Jun, No.42 player of CSI, attacked through the middle, took the pass before fooling and breaking through the guards, and then scored a goal. During the injury time, CSI launched an all-out attack, the snap shot of Wang Botao, No.22 player equalized the score again.