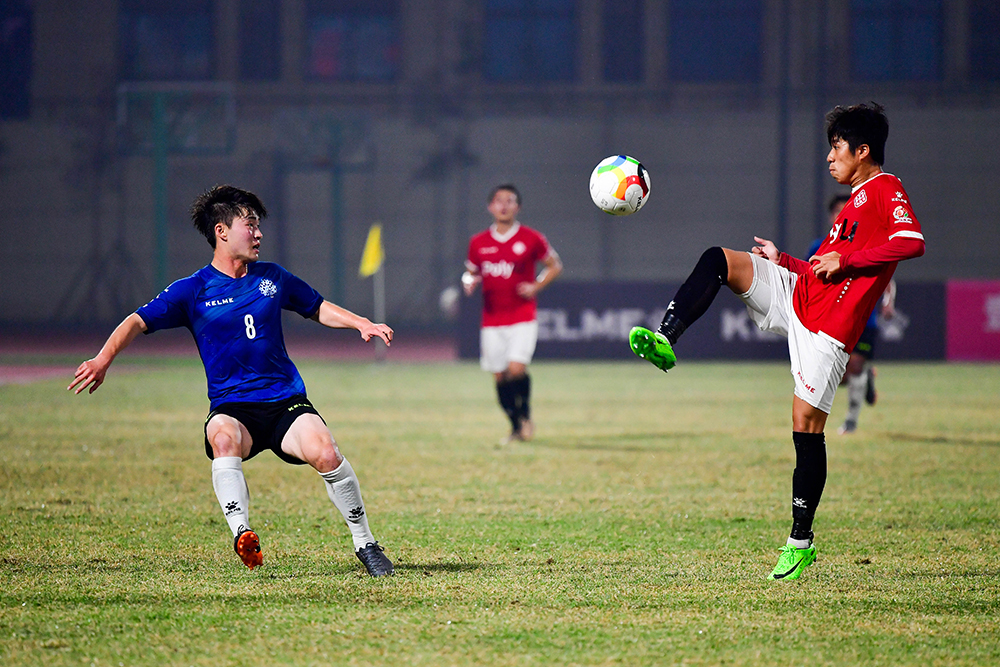 KELME 2018 AUSF Football Cup continued in Jinjiang of Fujian on the evening of November 8. In men's semi-final held on the football field of Yangzheng Middle School, Myongji University (the Republic of Korea) played against the Hong Kong Polytechnic University (PolyU, Hong Kong, China). After a wonderful match, Myongji University defeated PolyU with the score 5:1, and went through to the final.

After the match started, Myongji University went all out in attacking and created many chances. In the 19th minute, Myongji sent a cross into the middle from the right side, and their No.11 player Suk Ko followed up to head it home, making it 1:0 for Myongji.

In the 21st minute, Myongji's No.10 Jaeyun Lee knocked the ball past the defender and beat the keeper from the middle of the penalty box, doubling Myongji's lead, 2:0.

In the 26th minute, Myongji won a free kick on the left edge of the box, and then send it into the box. In the chaos, No.14 Seonghwan Park headed it home to add another goal for Myongji, 3:0.

PolyU still didn't want to give up at this moment, and they strengthened their tackles and attacking.

In the 41st minute, PolyU launched a fast attack in the right side and then crossed into the middle from the goal area. Their No.16 Ming Him Sun sent the ball into the net and narrowed the deficit, 3:1.

In the second half, although falling behind, PolyU continued to pressure their opponents in tackles and tried to create chances. They broke through into the box for several times, but were too impatient to change the score once gain.

In the 50th minute, Myongji University launched a counter attack. Their No.10 Jaeyun Lee broke fast in the left side, and shot directly from the left of the penalty box, restoring a three-goal lead for Myongji.

In the 65th minute, Myongji's No.11 Suk Ko bent a beautiful curve into the net, and made the final score 5:1.

After the final whistle, Myongji University beat PolyU and went through the final.