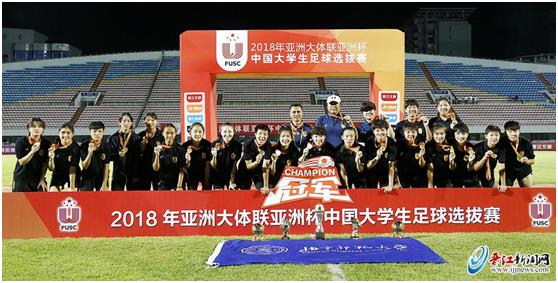 ijjnews.com, October 30 -- The 2018 AUSF Football Cup China Qualifying Tournament was held in Jinjiang this August, when four women's teams from colleges and universities across China gathered here to compete with each other. The women's team of Beijing Normal University gave strong performance and won the champion.

The women's team of Beijing Normal University, established in 1986, is one of the earliest women's football teams in China and is also one of the best in Chinese universities. In college women's football games in Beijing and even China, the women's team of Beijing Normal University has achieved splendid results: three consecutive champions in National University Women's Football Tournament and nine consecutive champions in Beijing University Women's Football Competition. Many of its members are members of National Team or former members of National Team and National Youth Team. Meanwhile, the team has engaged in many international exchanges, and competed with the national team of the Republic of Korea, university students’ team of the United States, and other teams.

In the 2018 AUSF Football Cup China Qualifying Tournament, the women's team of Beijing Normal University was highly praised by all audience with their excellent performance. They beat all other teams in three competitions to win the champion, together with other titles like the best team leader, the best coach, the best goalkeeper, the best athlete, and other individual awards, making the tournament a great success.

With hard works of two months, the team was full of confidence to compete. During the period, they engaged in busy practice and competed in the minor league of Chinese Football Association and won the champion again, which gave them more momentum to make full preparations.

As for practice schedule, they practiced six days each week and two and a half hours each day. While ensuring practice quantity, they never forgot their study. Talking about their goal for the AUSF Football Cup, the leader Wang Changquan said, "We hope to be qualified for the world cup next year, which is not easy and even difficult for us. We all work hard for it. "