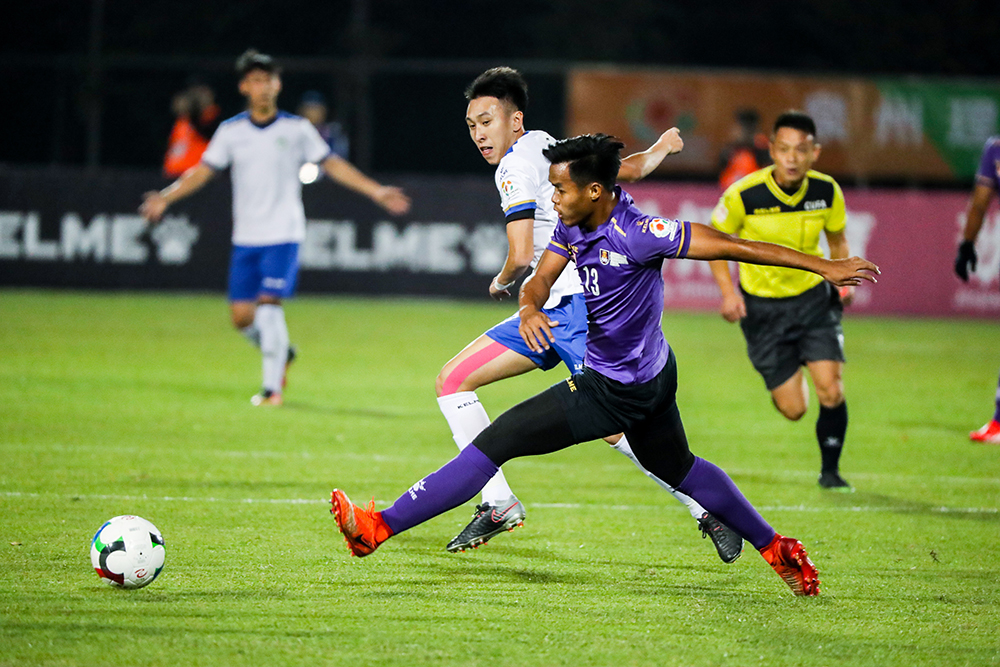 Mohamad Hakim Bin Ismail, the No. 13 player of Universiti Teknologi MARA is dribbling the ball to break through the defense. (Photo/Yang Yingcong)

On the evening of October 30, the first day when the men's group match of the KELME 2018 AUSF Football Cup kicked off in Jinjiang of Fujian, Universiti Teknologi MARA (UiTM) of Malaysia played against Macao Polytechnic Institute (MPI) on the football field of Quanzhou Vocational and Technical University. Finally, UiTM beat MPI by 2:0.

At the beginning of the match, UiTM was in better shape, entering the opponent's box for many times and threatening the goal. Despite failing to score, UiTM gradually gained ground with their advantages in heights and speed.

The deadlock was broken in the 23rd minute. UiTM's No.10 player Muhammad Nizarruddin Bin Jazi cut from the left side of the box and shot directly near the top of the arc, changing the score to 1:0. However, UiTM failed to score another goal in the first half.

In the 80th minute, UiTM's No.10 player Muhammad Nizarruddin Bin Jazi broke through the opponent's box again from the left side, dribbled past the defender and kicked the ball into the goal with his right foot near the goal area, changing the score to 2:0 and extending his team's advantage.

After this goal, the score wasn't changed again. After the final whistle, UiTM beat MPI by 2:0, gaining a good start.

After the match, MPI's coach CHAN Chi Cheong said that the team from UiTM performed very well in the match with very fast speed, "UiTM's players are physically bigger than us, but we showed a good ability in ball control. We failed to grasp the set-piece opportunity opportunities. However, this is just the first match, and I believe we can achieve better results in the following matches."

As for this AUSF Football Cup, CHAN Chi Cheong said: "This is my first time in Jinjiang. I feel the competition venue was very good, and we felt it in the warm-up today. Today the stands are also filled with enthusiastic spectators, many of whom cheered us on. The atmosphere was very good."