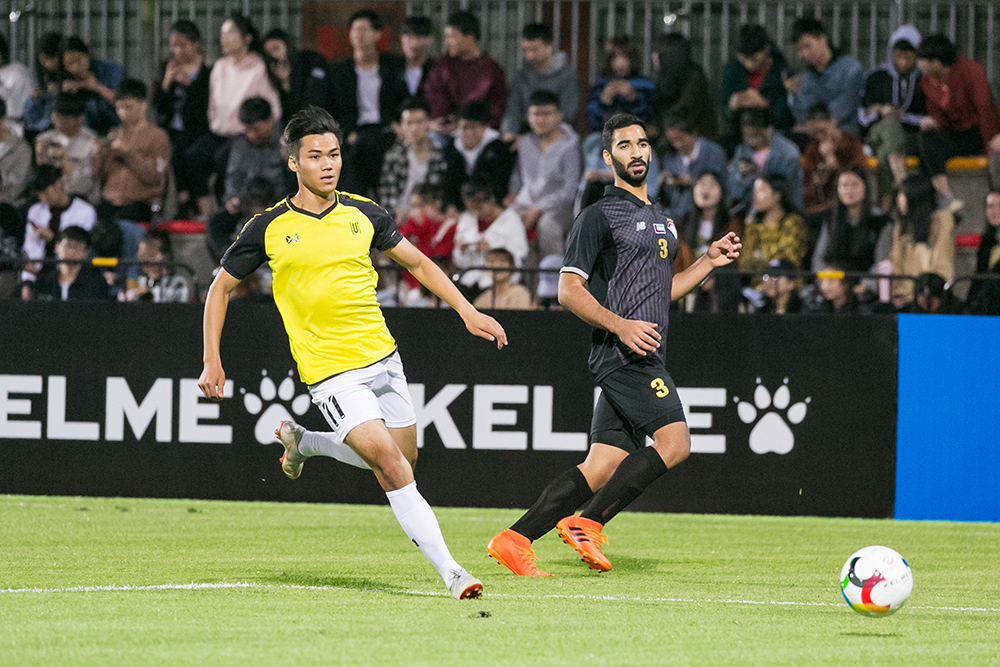 The No.11 player (the left one) of Bangkok Thonburi University is dribbling the ball over the No.3 player of American University in the Emirates (the right one). (Photo/Lai Jincai)

October 30 was the first match day of the KELME 2018 AUSF Football Cup. At 19:30 of that day, a men's group match was held at the stadium of Quanzhou College of Technology. The team from Bangkok Thonburi University (BTU) played against the team from American University in the Emirates (AUE). The match attracted more than 3,500 spectators. After a fierce competition, BTU beat AUE with a score of 2:0, gaining a good start.

In the 8th minute, the two sides fought fiercely in the penalty box of AUE, during which BTU's No.8 player Sundy Wongdarree took the chance to score a goal, changing the score to 1:0. In the remaining time of the first half, both sides failed to change the score again.

In the 80th minute, BTU No.11 player Poramet Arjvirai calmly made a shot in the opponent's penalty area with the support of his team members, changing the score to 2:0.

After the final whistle, BTU beat AUE with a score of 2:0, winning their first match.

In the post-match interview, BTU's coach said that although BTU won this match, the players were not fully prepared and their performance was insufficient. They would make better preparations for the next match against the University of Burdwan of India, and go all out for every match in the future, hoping to reach the semi-finals.