[Men's group stage] Match report of round 3 of group A: PolyU 2:2 TYUT 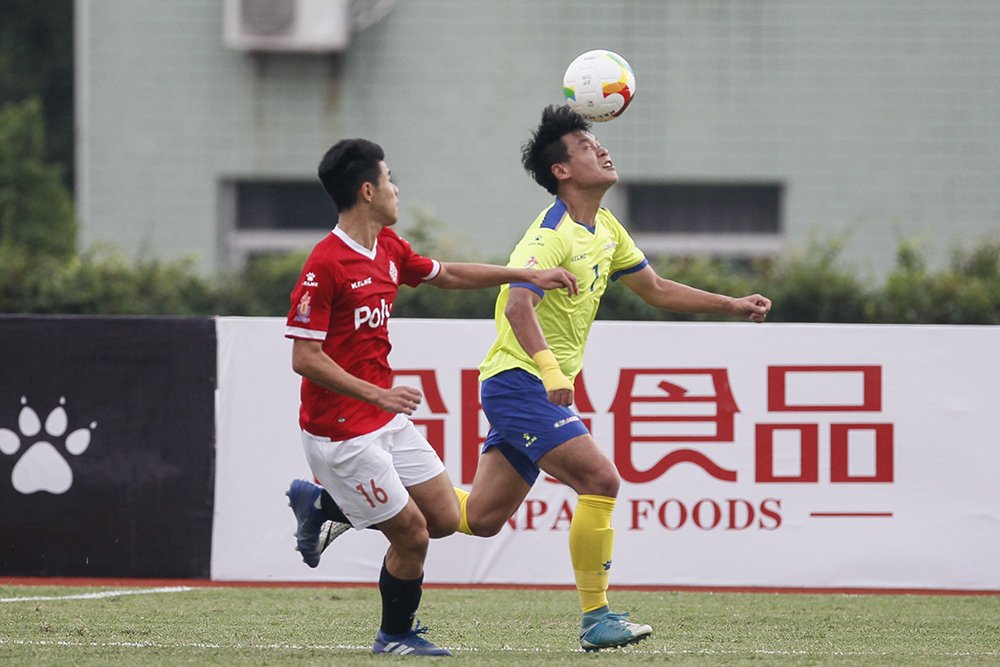 Men's group stage of KELME 2018 AUSF Football Cup continued in Jinjiang of Fujiann on the afternoon of November 4. The match between The Hong Kong Polytechnic University (PolyU) and Taiyuan University of Technology (TYUT) was held on the football field of Jinjiang Jiyan High School. After an exciting match, PolyU and TYUT drew 2:2 as the Hong Kong team were through to the quarter finals with the advantage of goal differences in the group.

Before this match, TYUT got a win and a loss in their first two matches, so they had to win this one if they want to get promoted while the Hong Kong side only needed a draw to get through. For both teams, this match was critical.

After the kick-off whistle, the match became a seesaw battle as both sides showed the intention to attack.

Finally, in the 15th minute, TYUT won a free kick near the edge of their opponents' penalty box. TYUT's No.10 Ye Yanfei took the free kick and curved the ball into the top right corner of the goal. TYUT 1, PolyU 0.

Then PolyU put more efforts in attacking, and gained some chances inside the box as they tried to pull a goal back. The match become more physical. PolyU got many good chances, but failed to change the score, which remained 0:1 at half-time.

In the second half, PolyU continued to attack and reinforced their tactics.

In the 61st minute, PolyU's No.9 Christian Ting Ying Balka made it 1:1 in a chaos in front of TYUT's goal. TYUT were under pressure at that moment.

In the 69th minute, TYUT won a free kick inside the box. No.27 Zhang Shuhao shot directly to gave TYUT the lead again, 1:2.

However, in the last minute of added time, PolyU won a corner, and No.8 Chun Yin Wong headed it home to make it 2:2.

After the final whistle, PolyU 2, TYUT 2. PolyU went through to the quarter finals with advantage in goal differences in the group.

"Our performance today is already very good. Both of our goals came from set pieces, which we have been training for." The coach of TYUT said, "Players of PolyU showed good spirit and scored the leveler in the last minute. We are still not well experienced. In the second half, our players tended to be conservative, and our stamina had some problem, which was very critical."

"Team work is the key for us to level the score and go through the group stage. We always say ‘never give up, never give up', we had to score, and finally we scored." PolyU's team manager Chau Fung Hing said excitedly, "I hope we could go into the final."

PolyU's No.8 Chun Yin Wong, who scored the late leveler for his team to get through, said, "we always believe in our qualities. I want to thank my teammates for the result. The late goal is not only my efforts, and it's the result of our cooperation. We played very well today. I am happy that our team can go in the semi-finals in such an important tournament."

When talking about this tournament, Chau Fung Hing said, "This is our first time in the AUSF Football Cup. Compared to those national competitions which we participated in before, teams in this tournament are all very strong, and the referees are also at international level. Jinjiang is also much better in terms of the organization of the competition."