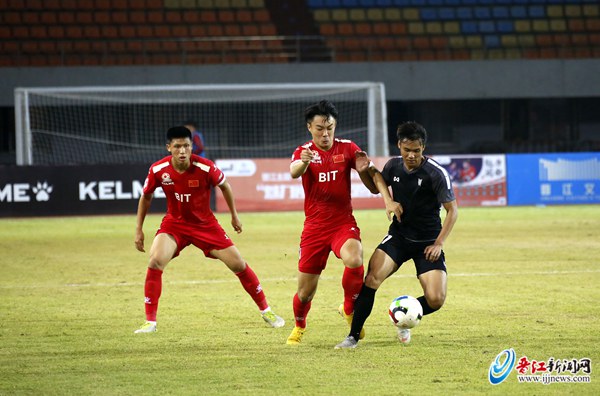 ijjnews.com, November 5 – The men's group stage KELME 2018 AUSF Football Cup came to the end on the evening of November 4. In the last round, Beijing Institute of Technology (BIT) beat Bangkok Thonburi University (BTU) from Thailand, getting through the group as the winner with three consecutive wins. The women's group stage will also enter the final round today.

Last night, BIT met with BTU at Jinjiang Sports Center. Both teams won their first two matches, so this match would decide the first place of Group D.

After the match started, it became very intense soon. Fast pace between defense and attack made the spectators very satisfied. BTU showed strong individual abilities in their attack, but defenders of BIT stopped their attacks with imposing tackles. In the 25th minute, BIT won a set piece. Their captain Li Sichen's pass was blocked by the defender, but No.9 Huang Yi won the ball again and scored a critical goal for his team with a powerful shot. In the 45th minute, BIT won another set piece, through which No.4 Guo Mengyuan headed it home to double their lead. At half-time, BIT 2, BTU 0.

In the second half, BTU mounted some counter attacks, and showed their skills in long shots. In the 57th minute, in a chaos near the penalty box of BIT, BTU tried a long-rang effort, which beat BIT's goalkeeper and narrowed the deficit. In the remaining time, the match became an intense seesaw battle. Both sides spent a lot of time fighting for the ball in the midfield, and created few effective attempts on goal. In the end of the match, BTU tried several shots on BIT's goal, but none of them could break through the strong defense of BIT's keeper Wang Wei. After the final whistle, BIT defeated BTU with the score 2:1, becoming the winner of the group. In the next round, they will play against the runner-up of Group C, Universiti Teknologi MARA (UiTM) from Malaysia.

After the match, BIT's coach Yu Fei said that his players delivered a perfect performance on the pitch and realized the goal of getting through the group, and next they would spare no efforts to prepare for the quarter finals. At the same time, Yu also thanked the fans of Jinjiang for cheering for BIT, "Their support gives us more power."