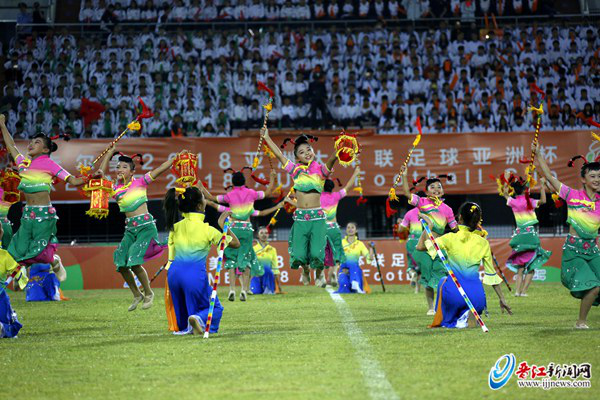 ijjnews.com, November 1 -- "The KELME 2018 AUSF Asia Football Cup opens now!" At the opening ceremony of the KELME 2018 AUSF Asia Football Cup on October 31, Xue Yanqing, vice chairman of the Organizing Committee, chairman of AUSF, and secretary general of the Joint Secretariat of Student Sports Association of the Ministry of Education, announced the commencement of the event, followed by a warm round of applause in Jinjiang City Stadium. Marian Dymalski, vice president of FISU, Li Yuyi, vice chairman of the Organizing Committee and vice chairman of Chinese Football Association, and officials of Quanzhou and Jinjiang, including Liu Wenru, Ji Xiangfeng, Zhang Wenxian, Hong Yuquan, and Lin Renda, attended the opening ceremony.

It is such a delight to have friends coming from afar! Liu Wenru, chairman of the Organizing Committee, invited vice chairman of FUSC, a member of the standing committee of CPC Quanzhou Committee, and secretary of CPC Quanzhou Municipal Committee, said that in the following days, teams will compete with each other and show their strength in Jinjiang. He expected athletes to deepen communication and understanding, and write a new chapter of "friendship, fraternity, fairness, resilience, integrity, and cooperation". He believed that each athlete will show the best of themselves on a level playing field, and present a wonderful football event to Asian people.

With the launch of AUSF Asia Football Cup, athletes can learn from each other and engage in cultural exchanges. This year's session will serve as a platform for Asian college students to realize their football dream and grow friendship as they work to scale new heights with a fighting spirit, noted Li Yuyi. Chinese Football Association will work with all sides to shape AUSF Asia Football Cup into a football cultural event with international touch and Chinese features.