Exclusive interview with Shao Shiyu, No.7 of Beijing Normal University

"Shao Shiyu, go, go, go!" Spectators on the stands cheered for a player many times. After the game, many fans waited for her in the tunnel, looking forward to taking photos with her and having the autograph.

Shao Shiyu is the No.7 football player of Beijing Normal University team. In the match with the team of University of Sydney (Australia), her excellent and impressive tiki-taka skill in midfield contributed to the first victory for the Chinese team in the KELME 2019 FISU University World Cup-Football. 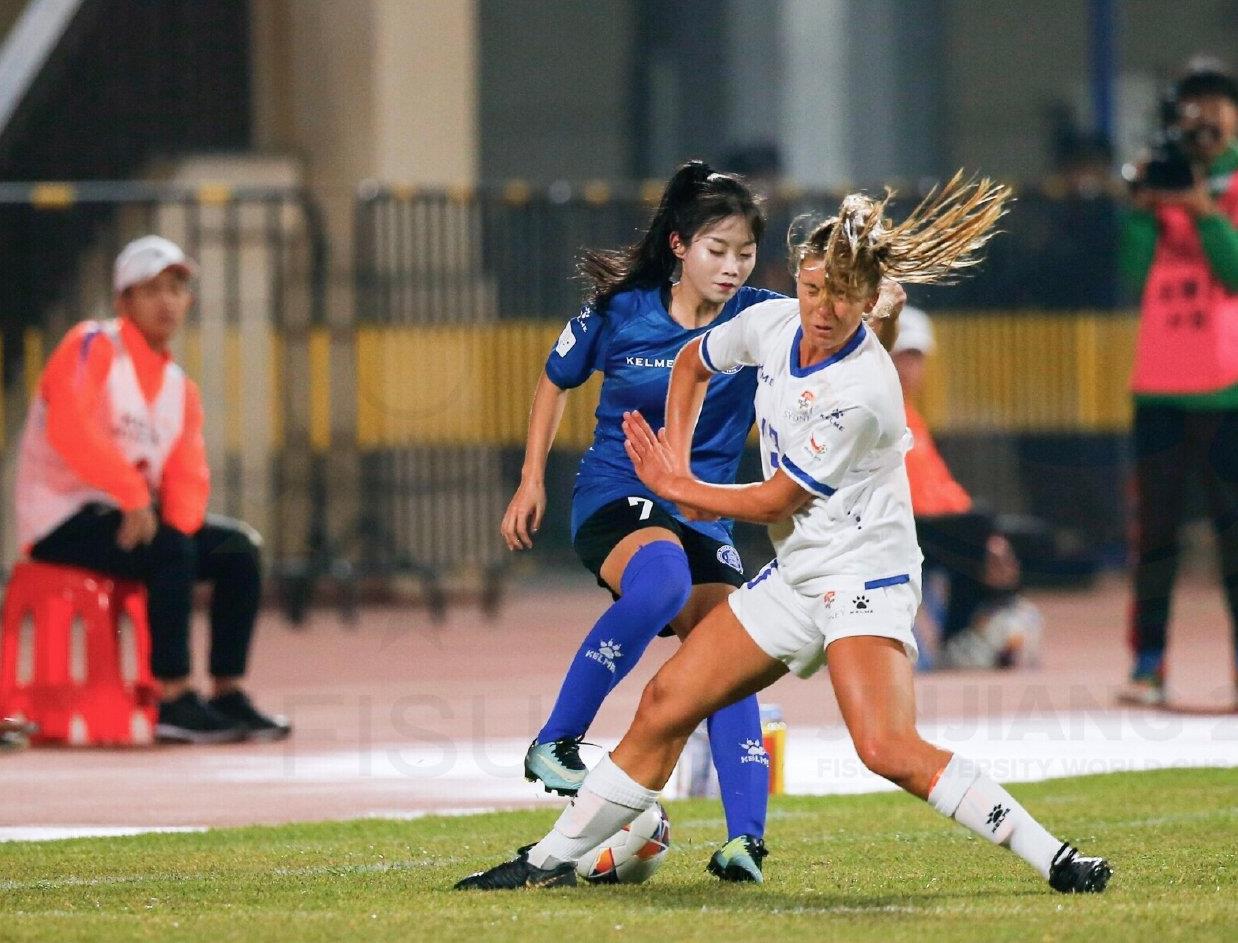 No Cross, No Crown

Shao Shiyu became a football player at 10 years old. By chance, a coach found that Shao Shiyu performed as well as boys when playing football, and sometimes, she was even faster than many of them. But at first, when she joined the training team, she did not adapt to high-intensity confrontation. Especially training with a group of elites, Shao Shiyu felt unprecedentedly stressed out. "Because everyone is strong, I thought I would go home at any time. So I was pretty worried and upset," said Shao Shiyu.

Choosing football is a difficult decision for Shao Shiyu. Because at first people expressed their disapproval of girls to play football. But due to her great passion, she kept it up to now.

"When I was at the bottom, I've asked myself countless times, 'why do I choose to play football?'。 But after a lot of agonizing, I gradually found that I had become more powerful with better career development," said Shao Shiyu.

"In fact, in the beginning, I chose football for escaping from learning." Shao Shiyu said with a smile, "but gradually, I have made lots of friends through football. And many girlfriends are the best players. It's football that makes me get along well with them. " Shao Shiyu, with her unique talent, has grown rapidly in her football career.

After winning the team of University of Sydney at YangZheng Middle School, Jinjiang, Fujian Province, Shao Shiyu posted several group photos with volunteers and fans on Weibo, writing that "Thank you for your enthusiasm and support." Many fans showed their likes, and some said that Shao Shiyu might be the future of women's football in China. Others also praised her beauty in sweat on the field.

Not be discouraged by failure and prepare for the next match

As the only Chinese team to qualify in this competition, the women's football team of Beijing Normal University met No.1 of Group B, the University of Ottawa (Canada), in the semi-final. Shao Shiyu played for 90 minutes. She felt regretful when they were beaten in the penalty shootout.

"In fact, we had got a lot of opportunities in the whole game, but we failed to grasp them. It's a great pity to lose the game at that moment. But we should cheer up and prepare for the next one. And we will try to be the third," said Shao Shiyu. When recalling the semi-finals, Shao Shiyu showed her unwillingness, which made her keep silence several times.

Zhang Xinyue, who missed the penalty, cried bitterly after the match. According to Shao Shiyu, after the semi-finals, Zhang Xinyue was in a low mood the whole night. "I kept comforting her on the way back to the hotel, and truly hoped she could adjust her state as soon as possible."

The lose has frustrated players of Beijing Normal University. But the competition is not over. The next match for the third place will also be a severe test. In the next competition, Shao Shiyu showed her confidence in winning the College of Asian Scholars (Thailand).

"I'm confident for the game. We lost to them in last year's Asian Cup. This year, we must revenge and win them. I have played against with the team from Thailand on behalf of National Youth Team, and we won the game, so I have the faith to beat them this time." Shao Shiyu said firmly.

Looking Forward to be a beautician

On September 1, Shao Shiyu posted the enrollment notice from Beijing Normal University on Weibo. She was very happy to be enrolled in such a century-old school. Influenced by the school, the girl who has been galloping on the green field all year round has more life plans.

"Because of the long training in normal times, I often miss my lessons. After becoming a college student, I hope to read more and communicate with teachers to constantly improve myself by learning professional knowledge."

In addition to playing football, Shao Shiyu is a "little girl" who enjoys dressing up. On social media, many of her selfies can be found, and she expressed that taking selfies is one of her hobbies.

"If I stop playing football one day, I will consider to learn make-up. Because in my spare time, I'd like to go to beauty salons for nail painting and facials. If I didn't choose to play football, I might have become a beautician now." Shao Shiyu said with a smile.