“Enjoy the glory in Jinjiang”. As University of the Republic (Uruguay) lifted the champion trophy which represents the highest honour, KELME 2019 FISU World Cup-Football. 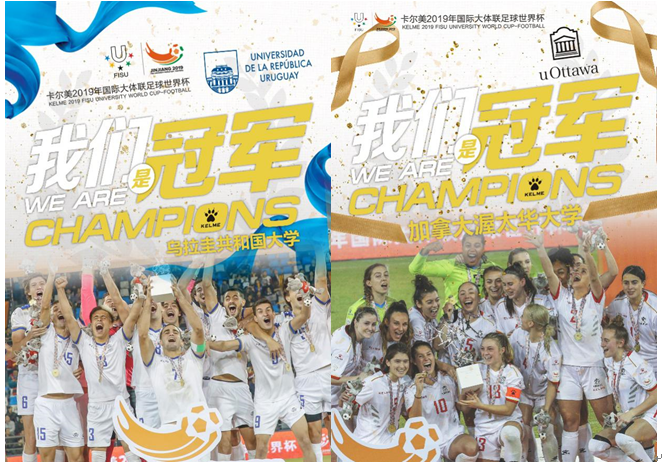 Authorities from both Jinjiang and FISU attended the closing ceremony, which ended after cheering artistic performance. As a host, Jinjiang kept its words to create wonderful memories for all the competing teams and people all over the world by guaranteeing the tournament and broadcasting and holding culture exchange activities featuring local characters.

24 high level university football teams with from 16 countries gathered in Jinjiang 2 weeks ago, aiming to achieve the highest honour. To demonstrate a football feast to the audience, committee organization has been set up since last June and 400 million yuan was invested in 8 fields and the reconstruction of 6 training places. Experts were invited to maintain the turf during games as to reach the international standard. Zhang Wenxian, Mayor of Jinjiang Municipal People's Government, powerfully said:”FISU World Cup was a precious chance to improve the city for Jingjiang. We insist that we promote the city, develop the industry and benefit citizens through the tournament. We must make efforts to prepare for the game and promote our city in the meanwhile. Jinjiang is confident to hold a wonderful football feast for the world.” (No vacancies in Jinjiang Football Stadium with a capacity of 8,000 spectators on final day)

The committee managed to broadcast all 62 men’s and women’s games online and 7 major ones on TV. The opening and the final game was broadcast by CCTV. Few are aware that it was the committee organization’s hard preparation work that made it possible for football fans to watch the games online and on TV. According to the staff, the football cup this year were processed in many venues, most of which are on campus and thus not that standard as professional pitches. To finish broadcasting, much equipment needs to be improved or changed. Since requirements for broadcasting vary from TV、Internet to official platform of FISU, the organization needs to test in the field over and over again to avoid accidents.

For safety, the committee formed a security team that included more 1,700 people and recruited 435 volunteers. Volunteers from different universities of Jinjiang provide reliable services for the competing teams, the media and football fans. FISU World Cup is not only a platform for the competing footballs to communicate and learn, but also a chance for volunteers to learn and experience something. A volunteer with Ukrainian team told us:” It helped me to improve my communication skills and learn how to get along with other people. I also gained how to assign my time to different things. It will surely be a memorable experience.”

Rich cultural exchange activities were specially made for each competing team.They visited a Traditional Cultural Tourist District in Wudian, enjoyed the stone carving in Qianyuan Mountain and took courses that taught Chinese traditions in Quanzhou’s university. Team members loved these activities such as Gaojia opera, paper cuttings, calligraphy, sand painting, pottery, Chinese knotting and so on. Many foreign footballs told the press that Jinjiang is a beautiful city that enjoys friendly people and the long history. They had fun learning Chinese culture and staying in Jinjiang.

Final teams in men’s game are University of Wollongong and University of the Republic (Uruguay) after severe competing. Uruguayan team scored with a penalty kick in the second half, defeating 2-1 against its Australian rival and winning the champion. The Korean university reversed and beat the Mexican team 4-2 and got the third place. Women’s champion, University of Ottawa, came a day before today. Its Brazilian competitor, defeated 1-0, was heavily favored to win. Thai team beat Beijing team in the penalty shootout and ranked the third. 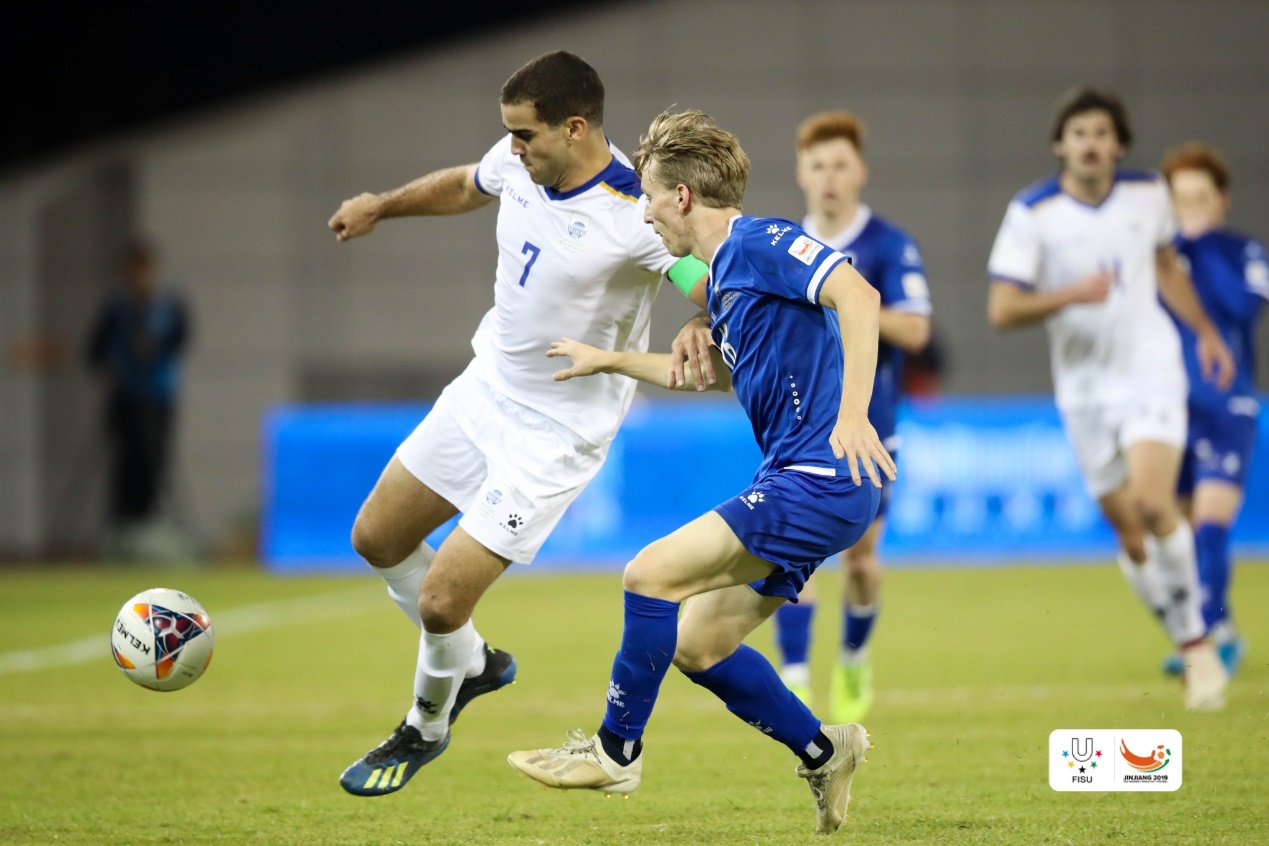 (Uruguayan footballer scored twice in the final, making him the MVP)

Chinese men’s teams in the World Cup-Football are Beijing technology Institute, Hohai University and Taiyuan University of Technology, ranking the twelfth, thirteenth and sixteenth respectively. Two Women’s teams are Beijing Normal University and Donghua University. Yufei admitted:“We have seen the physical and sill weakness by competing with different foreign rivals. But the morale and the spirit were worth praising. I wish we can narrow the gap by training and can compete again with strong foreign teams in the future.”

There are 24 teams in this World Cup-football, including 16 men’s teams and 8 women’s teams. The total scored goals by 62 teams are 207. Leonz Eder said:”The competing teams are from 6 continents. It is not easy to coordinate all the teams so FISU won’t expand the competing teams at present. But it will hold qualification games based on continents rather than invitation, which allows more excellent teams to take part in the game and make it more gripping.” 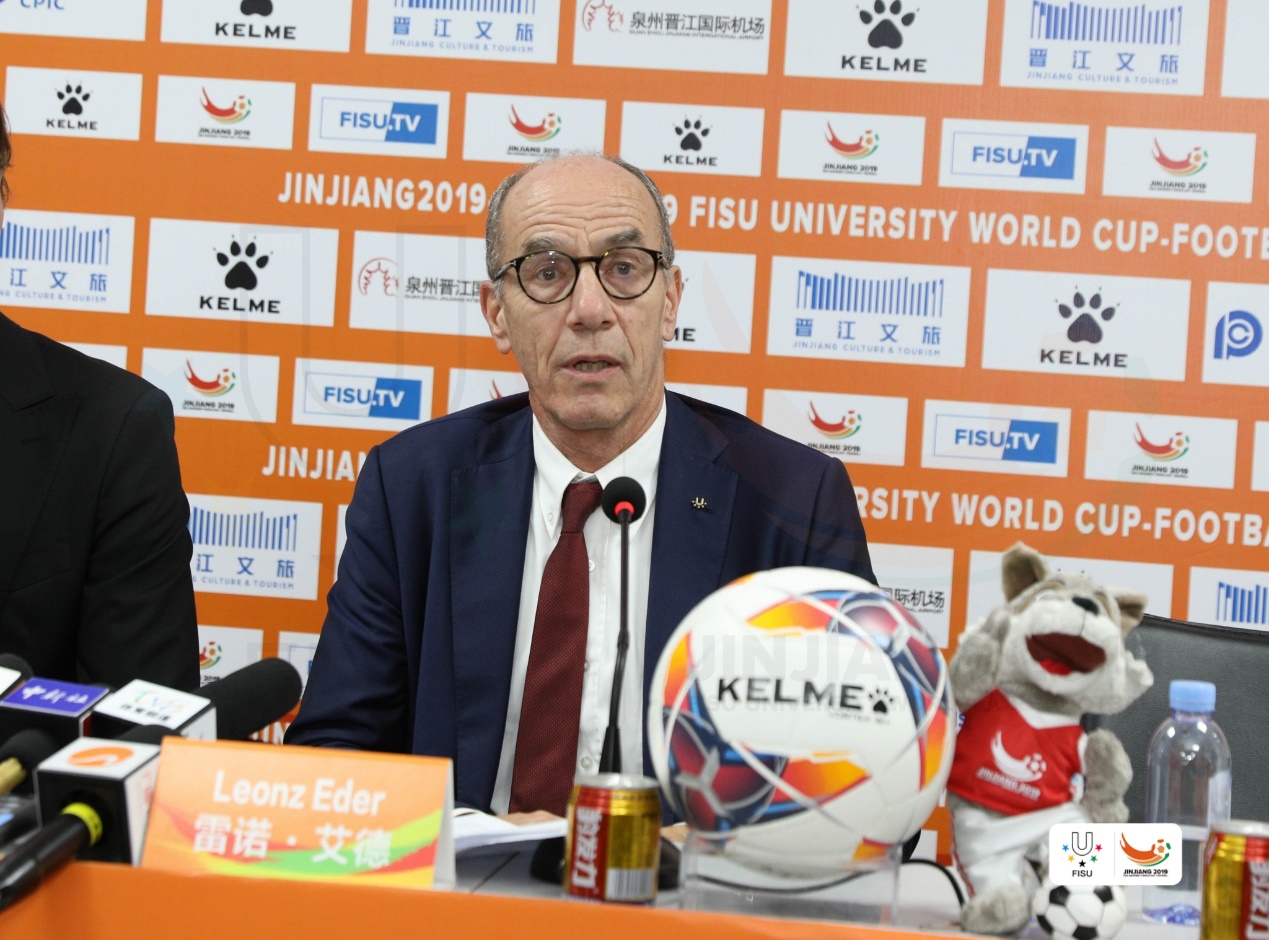 Games were proceeded in order. Jinjiang is qualified to hold four consecutive FISU World Cups-Football in Jinjiang since this year. It will learn from the tournament and make a better event in the future.