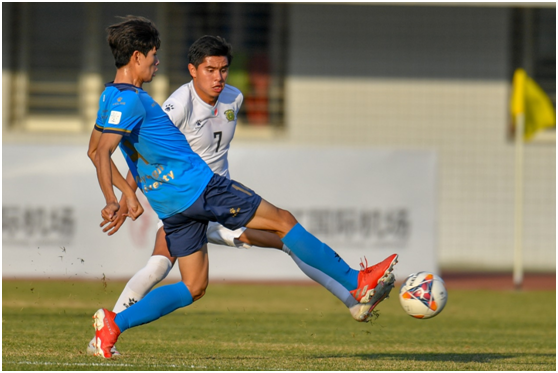 At 4:00 p.m. on December 1, the third place play-off of the men's group at the KELME 2019 FISU University World Cup-Football kicked off in Jinjiang Sports Center. The team of Myongji University (KOR) fell behind in the first half by 0-2 and had one player sent off. However, in the second half, the team scored four goals in a row and defeated the team of Autonomous University of Mexico State (Mexico) with a result of 4-2, winning the third place.

In less than one minute after the match started, the Mexican team got the ball in the penalty area of the rival, Luis Roman, No.14 of the team volleyed the ball into the net from close range, helping the team make a good start. In the 12th minute, a free kick made by Seungwon Yeo, No.6 from Myongji University, the ball slipped out of the hand of the goalkeeper. After 10 minutes, Suk Ko, No. 11 from Myongji University, passed many players from the rival with the ball and passed the ball to his teammate, Junha Chung, No.7 of the team made a header but the ball was rejected by the beam. Struggling to forge ahead, the team of Myongji University faced a worse scenario in the 37th minute. Goalkeeper Taein Kim fouled in the penalty area when he competed with the rival's back fielder, and was sent off by a red card. The team of Autonomous University of Mexico State took the penalty and scored, entering the second half with 2-0.

After the match, the coach of the Myongji University team revealed the secret of winning the match:"I let the players focus on attacking the left side in the second half at halftime, making the rival lose the advantage in numbers. We are very happy to get the third place."