On the evening of November 30, the final of women's groups of the KELME 2019 FISU University World Cup-Football kicked off. In the end, the team of University of Ottawa (Canada) beat the team of Paulista University (Brazil) 1-0 in Jinjiang Football Park and won the champion. The teams of Paulista University, College of Asian Scholars (Thailand), and Beijing Normal University (China) won the runner-up, the third place and the fourth place respectively. Leonz Eder, FISU first vice president, Emily Lau, Football Technical Committee Chair of FISU, Yang Liguo, vice president of FUSC, and Zhang Wenxian, Mayor of Jinjiang Municipal Government, attended the awarding ceremony. 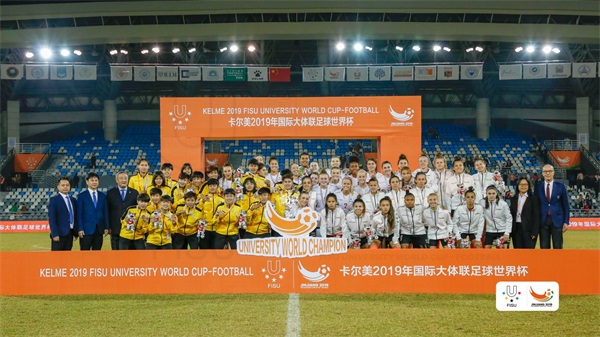 At 19:00 today, the final of men's groups will kick off: the team of University of Wollongong (Australia) and the team of the University of the Republic (Uruguay) will compete in Jinjiang Football Park. A grand closing ceremony will be held after the match. 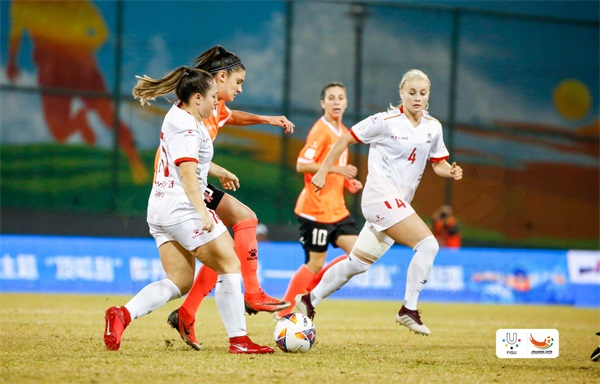 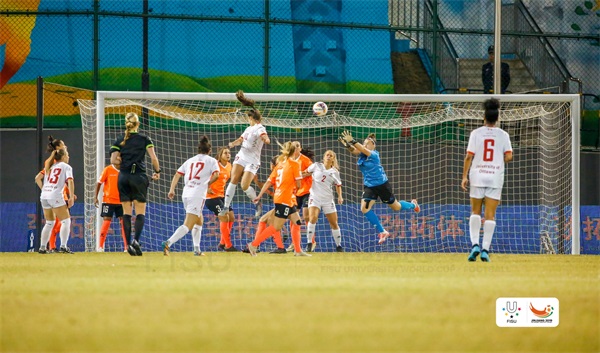 The audience watched the fierce competition with excitement. After entering the field with players, the ball kids were reluctant to leave, and came to the stand to cheer for them. "It is the first time for me to be a ball kid, and I am so excited. I am also nervous for the sisters on the field, and I wish them play well," said Deng Xiangyu from Xinyang Primary School. 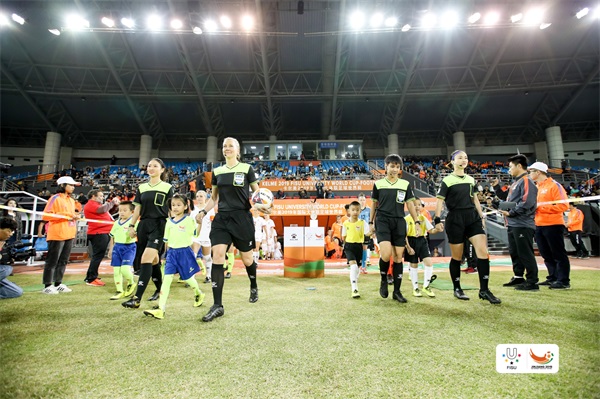 On the stand, a Chinese young man was chatting with players of University of Malaga happily. "I have studied in University of Malaga, and I am glad to see schoolfellows here," said Wu Zhizhao. Talking about the thought about the match, he said, "I love football very much and I came to watch almost all matches. In the semifinal ending in this afternoon, the team of Beijing Normal University was beaten by the team of College of Asian Scholars with only one goal conceded. However, those female players have shown to the world their strength." It was worth mentioning that on the stand there were a group of fans of University of Ottawa team, who shouted "Canada! Canada！” Paul Lefebvre, father of No. 2 Emma Lefebvre of University of Ottawa, was among the fans. He said he came to Jinjiang specially to shout for his daughter and his Alma mater, hoping to see them win the glory.

At the press conference after the match, Johnson Steven, coach of University of Ottawa, said, "It was a fierce competition. Facing the team of Paulista University with fine techniques and fierce attack, we hit a goal in just two minutes. Afterwards, we spent 88 minutes to maintain the score, and won the match with joint efforts."

Johnson Steven said that this year's competition is of high standards. All the rivals they faced were powerful since the group matches. "It is a challenging competition. All our players have worked hard and performed well."

"I am very excited, and the goal I scored helped the team winning the match and the champion trophy. Such a feeling is excited and hard to describe with words. In previous matches, I missed many opportunities of hitting a goal. Luckily, I grasped the opportunity in the final," said No. 10 Mikayla Morton, the core attacker of the team. She said that wearing the number 10, which stands for the core, is a kind of glory.