ijjnews.com, Nov. 30 — The reporters visited the players the hotel the day before the women’s finals of the KELME 2019 FISU University World Cup-Football.This time, our guests were players of the University of Ottawa from Canada. 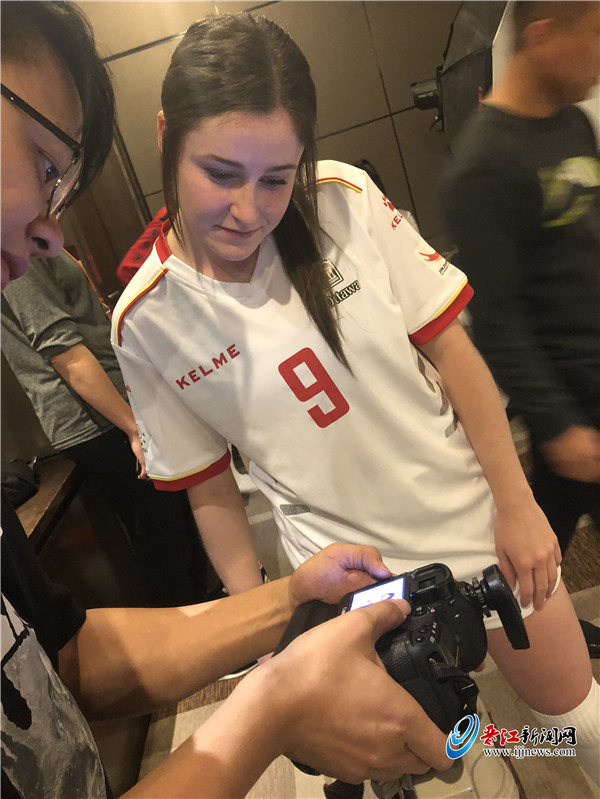 Members of the two women’s football teams who were qualified to the finals took a personal photo shoot on the day. It is said that when the players enter the stadium at night, their photos will be displayed on the large screen. At the scene of the shooting, girls from the University of Ottawa smiled sweetly and posed differently before the camera. “Thank you very much for your thoughtfulness. We have taken photos of the whole team and there are special videos during the game. Now you also take personal close-ups for us. After returning home, I will share what I saw and heard in Jinjiang with my family.” Miranda, a player of the University of Ottawa team, told us that it was great happiness to come to Jinjiang to participate in the game, and she were impressed with the special snacks here.

The team members of the University of Ottawa did not come to take photos together, but in batches. The team captain, Smith Danica, explained that they were preparing their final exams attentively. “Two days after returning home from the competition, they will have their final exams. They all cherish every second.” Caitlin, who just finished shooting, said: “It’s painful but happy to play in Jinjiang because we have to focus on learning and competition simultaneously. However, from these days of cultural exchange activities, we have learned a lot of Chinese culture, which make us benefit a lot.”

Today, they will fight for the finals against girls from Brazil. According to Smith Danica, full preparations have been made for the match. “Before every match, we will analyze their videos to know their characteristics, and make corresponding tactical arrangements.” At the same time, she also believed that they would be the champion finally.

Captain Danica: We’ve got closer because of the  FISU University World Cup

From the group match to the semi-final, and then to the finals, the team of University of Ottawa (Canada) has marched forward courageously. The team leader Smith Danica said: “I would express my thanks to the World Cup and Jinjiang, for closing the distance of football fans all over the world and gathering us here to share the football carnival.”

In this competition, there are 8 teams in the women's group, which are not only from Asia, but also from America and Europe. When talking about the place where she was impressed with most after coming to Jinjiang, Smith Danica said, “When we came here, there were many people who helped us. Thank them very much.” After every game, the team will return to the hotel for a rest, of which relaxation recovery in the swimming pool is their favorite way. Danica told us that their volunteers were warmhearted and the service provided by the hotel was very considerate, which laid the foundation for their good performance on the field.